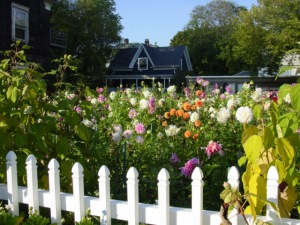 Some of you already know the story of my neighbor, Mr. Connelly. But it always deserves to be said again.

Mr. Connelly is about 80 years old. Of course, I have thought he was 80 since we moved into this house and that was almost 22 years ago now. About 12 or 15 (?)  years ago he started to plant dahlias. Dahlias are a beautiful flower but oh so much work. Not only do they have to be planted, they are not winter tolerant in our zone so they have to be dug up every fall, split apart, stored for the winter  and planted again in the fspring. I have planted dahlias before (About 3 of them). They remain part of the soil, may they RIP.  They are a HUGE amount of work.
Every year, Mr. Connelly would have more and more dahlias until they filled up every inch of yard that he has. Lucky us.  The picture above shows my house  in blue with a yard full of dahlias in front. Let me tell you, there is no better way to have a yard full of flowers than to have your neighbor plant them. I do the enjoying. And I must say that I am darned good at it! 🙂

This past winter, I did not see Mr. Connelly for a long time. He is usually outside bright and early every single morning all year round.  After a month or so of not seeing him, I knew something wasn’t right. His son informed me that he had been in the hospital for quite a while and then went to rehab. He had “everything” wrong with him. Whatever that meant. It didn’t sound good.

Mr. Connelly finally came home in the early spring. We had a pretty horrible spring here so there was no good planting time. When I saw him trying to get around with a walker, I knew that perhaps this would be the year without a dahlia. Made me a little sad, I have to admit. I imagined how hard it would be for Mr. Connelly to have a summer with out beautiful flowers.

His family stepped in, as sometimes they do. His son and his niece did a HUGE amount of work to get the dahlias planted and maintained. By the end of the summer, Mr. Connelly was out puttering around in the garden without his walker but still not strong enough to do all that work himself. I’m not sure how many summers he has left or how long his family will take on the herculean task of the garden, but I did enjoy it so. Not as much as Mr. Connelly of course, but it sure is nice to have a view like mine in the summer.

But to everything, there is a season and the freeze will inevitably be here. The dahlias die immediately upon the first frost. The race is then on to cut the stalks and lift the bulbs. Thousands and thousands of them.

That’s what they did today. Another season has come and gone, the dahlias just a sweet memory now. 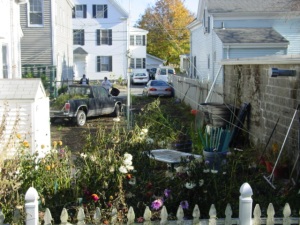 I hope to see them another year!